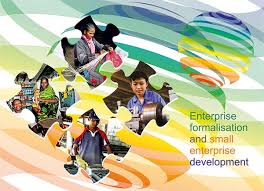 By:   admin Transition Comments:   No Comments

There is clamouring for making MSMEs accepting formal processes than remain informal. However, the choice of timing (to become formal) is a matter of dilemma for many entrepreneurs.

Recently one of the close confident secured a limit of Rs 30 lakhs in the online platform www.psbloansin59minutes.com and it was a matter of intense jubilation for him. On the one hand, it was a great endorsement of his entrepreneurial journey which has witnessed steep upheavals in the past few years and on the other hand he secured stable source of funding for expanding his business.

He submitted all the documents for his home branch where he is referred to for further processing and formal sanction.

After a considerable amount of delay for various internal reasons, bank officials started a discussion on the appraisal part of the loan an important step for sanction. While analysing the balance sheet of the firm for the last three years, they found some entries in a few heads under expenditure and also holding level of inventory were not consistent between the years. In other words, the entries are not in proportion to the sales level between the years.

It took a long time to convince them to appreciate that these were genuine. Though bank officers apprehensions were in line with analysing a company’s finances, what was lacking in the conversation was the truth that the entrepreneurs’ journey does not conform to normal standards expected in formal bookkeeping.

Reality check with entrepreneurs presents a story of struggle in the initial years. Before they made it big, they struggled through moments of near-debilitating anxiety and despair–times when it seemed everything might crumble.

Entrepreneurs’ mindset in the formative years focuses on more of proving to himself that he is doing the right job. They are more concerned with survival than with boosting their output.  In the process they tend to ignore formal bookkeeping, documenting investment, expenses, subjecting fully taxation rules etc.

Entrepreneurs often juggle many roles and face countless setbacks–lost customers, disputes with partners, increased competition, labour problems–all while struggling to pay salary. There are traumatic events all the way along the line.

No matter what one’s psychological makeup, big setbacks in one’s business can knock him at. Even experienced entrepreneurs have had the rug pulled out from under them. Thus entrepreneurs struggle silently. There’s a sense that they can’t talk about it, that it’s a weakness.

For many entrepreneurs, it is a tumultuous journey.  Many of them go through a series of exploration of ventures. As they move from one to another,  they carry baggage of pains from failures and mistakes committed in the process. Emotional residue from the years of tumult still lingers. These compel them to keep away from all the formal processes until it reaches a certain level of maturity.

What entrepreneur posses is Entrepreneurial alertness :

Once they spot the opportunity, they start giving shape to it.  It normally follows two ways. One is formal business planning. It is normally found in new generation startups especially in technology space.  However, in the majority of enterprises, it starts in a very informal way and improving over the period of time.

Formalising at the beginning is seen as discomfort:

Many first generation entrepreneurs opt for the strategy of improvisation. With improvisation, design and execution of actions happen at the same point or very close to each other. People do not plan their activities beforehand but generate ideas about what to do and how to do things on the spot.

Improvising entrepreneurs usually start with a rough idea, and the final business concept develops and unfolds over time in ongoing interactions with customers, suppliers, or other stakeholders. Instead of planning, improvising entrepreneurs start by taking action and design their actions along the process of creating the new venture.

In some cases, new enterprise takes birth on recombining available resources for new purposes. It is quite useful in resource-constrained and adverse business environments for making progress in the new venture creation process.

The formal approach in business management has many advantages especially convincing lenders and investors. However, many of them feel it is time-consuming, hinders flexibility, and adds no value.

They believe entrepreneurs should instead spend their time organizing activities, such as acquiring capital or equipment.

Bootstrapping is the way of initiating into the venture. Entrepreneurs always explore ways to limit their financial exposure. They avoid hiring noncore staff as they feel it is too early to do so.

Not having proper books and managing key variables can be remedied going forward. In the instant case, Bankers should show interest to see how the business has grown from scratch and how the story is will unfold into the future. This is very relevant for enterprises in the early stage of growth.    An enterprise grown from scratch to a  level of turnover exceeding Rs 100 lakhs in four years implies that it has steadied the business model and has wider acceptance in the market. These make a strong case while assessing the loan proposal.

Nonetheless, entrepreneurs should make sincere efforts and commit resources to make their business become formal. Becoming formal is not only to secure financial resources from outside but also a means to organise the company to expand its capacity to grow more in the later stage. In their own interest formalisation should begin at the earliest feasible.

There is greater thrust to make MSMEs formal. Even the policymakers are talking about it. However, being informal at the beginning is the soul of entrepreneurship. Hence let us accept it and explore ways to work with entrepreneurs than seeking corrections upfront.